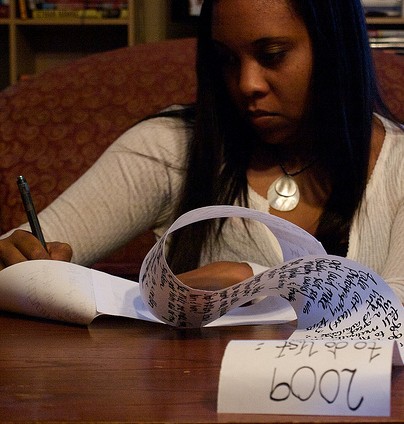 [Note: I’ve spent a lot of time bashing productivity in the past. I’ve long known that focusing too much on productivity leads to misery for most (myself especially). But I haven’t done much in the way of providing an alternative method of working. This is largely because I didn’t really have an answer. I knew what was wrong, yet I didn’t really know how to fix it. Now that I feel that I have enough of an intelligent perspective on this topic, I wanted to share what I’ve learned here.]

We’re exhorted throughout out our lives at all angles to be “productive members of society.” Naturally, you would think that being productive would make you happy, right?

So if aiming to be productive is supposed to be such a good thing, why does it often lead to so much misery?

The problem happens when we get hyper-focused on producing. We start to think we’re inadequate unless we’re being “productive” or “getting things done.”

But getting stuff done by itself is meaningless. When productivity becomes ubiquitous, we’re looking through the wrong end of the telescope.

Productivity has its place, after all. But if not put in its place, it can run rampant. We can feel guilty for not producing. We feel bad when we’re not checking things off a list.

The problem isn’t with valuing productivity; it’s letting its scope become too big. It’s allowing it become the means and the end that makes us hate it. And we resent it because we resent ourselves for not doing enough.

Becoming too focused on productivity leads you to see that there is always “more” to be done. There is always more you can supposedly do. And there is no ceiling.

The other problem with productivity is that it’s too associated with numbers and quotas. Some of the most useful time spent can’t be measured at all. Does that mean it’s not productive? And does it even matter?

In essence, the mindset that revolves around productivity equals a feeling of “never enough.”

I’ve experienced this far too often myself. The more that I focus on being more productive, the more inadequate I feel. As my output increases, so does the sense that I could have done more. And that ultimately leads to guilt and frustration. Then, I try to re-engineer my productivity system further, and try harder. The cycle continues and becomes a closed loop of insufficiency.

The harder you try to be more productive, the less productive you feel.

So, what should you do instead? I’ve tried all sorts of things. I’ve tried not caring. I’ve tried denouncing productivity altogether. I’ve tried only focusing on the most important stuff. And of course, I’ve tried being super-productive.

But all of these are only partial solutions. They’re hacking at the branches while the root is left firmly unscathed.

The solution I’ve found I believe to be holistic in nature. It is bigger than the sum of it’s parts. And it has completely changed the way I work, and operate.

Although I don’t believe the answer I’ve found is absolute, maybe it will work for you too. I’m still evolving and changing, so my views on it may change in the future, but this is the direction I’ve found useful to move in. The answer is threefold and progressive. Each step leads up to and builds upon the previous one.

The first shift is to switch from asking How many things can I get done? to What actions can I take that will make me fulfilled? This is a simple shift, but the results are dramatic.

Just this slight alteration can be highly challenging. Often what makes us feel fulfilled, doesn’t seem to “get much done.” A typical fulfilling day for me might look like:

From the outside, it doesn’t seem like I’m getting much done, does it? I’m not really checking lots of items off a list, or completing a lot of measurable tasks.

However, I am creating a lot of value for myself and others. Which leads to the next key…

I’ve found that creating value is a much more meaningful way to view how effectively I spend my time. If I’m focused on always being productive, it’s easy to lose focus of the value in you’re doing, because productivity usually involves maximizing time. Value, on the other hand, has no interest in maximizing time, because value is not directly correlated to time spent.

You can be highly “productive” without creating much value. Or you can spend very little time producing and create an immense amount of value.

Also, value is relative to perception. I may perceive something as highly valuable ( hiking for instance), and others may think it’s quite boring or uninteresting. Whether or not it’s productive doesn’t really matter. Whether or not it creates value to the individual, on the other hand, is extremely relevant.

When I plan my day, I like to think of the different levels of value I’m creating:

So there are activities where I’m primarily the one that is benefiting (exercise, recreation, etc.) and it increases my capacity to provide greater value to others (because I’m maintaining or increasing my ability to expend energy).

They are all interconnected and interwoven. But I’ve found it best to split them as equally as possible. So in a given day I may spend…

All of my days are obviously not perfectly divided. Sometimes I’m highly unbalanced where I spend the whole day or week creating value for others. Sometimes I spend the majority of the time working on a product. And some days I’ll take the day off to spend time with my wife. But thinking about dividing these roughly into thirds helps me keep perspective.

This is probably the hardest of all three keys, and the reason I listed it last. What does natural rhythms even mean, anyway? It sounds ambiguous and kind of whimsical. You can’t measure it, you can’t plan it, you can’t really control it. That’s a little unnerving for most people. At least that’s the reason I’ve had such difficulty incorporating it myself.

Following your natural rhythms is a highly intuitive way of living. And it’s messy. Too much scheduling and measuring can obstruct it, because it requires more flexibility.

It also involves trusting yourself.

Learning to do that has been the most challenging thing for me. I never really realized how much we don’t trust our natural impulses and subtle intuitive directions. For me, this has mostly been about learning to trust what I need.

Following my natural rhythms (at least the best that I can) has lead me to spending days or weeks where I do nothing but connect with nature, or times when I spend entire days reading and meditating. And it’s led to me the opposite spectrum; holing myself up in a cave and writing or creating for days or weeks on end.

Ultimately, when I do this the fulfillment and value takes care of itself. And surprise… I’m highly productive.

But it’s not on a schedule. It’s not on a rigid time-line. It’s not something that I can measure or regulate. To be honest, it can be a bit intimidating at times.

But it’s also led me to the greatest happiness that I can possibly experience. And because of that, learning to become adept at this will be my focus for a long time.

That’s what I like about it. The best paths have no end in sight.