Beware of any enterprise that requires a new set of clothes.” –– Henry David Thoreau 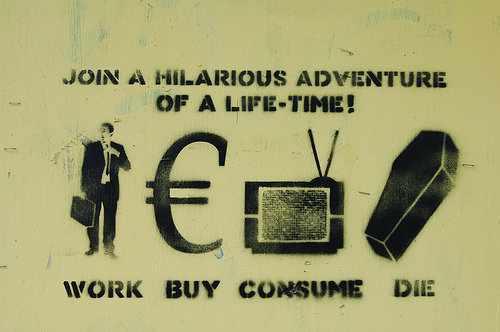 A lot of names, one thing: conformity. And I do my best to question what’s popular as much as possible.

Needless to say, I’ve spent a lot of time bashing the mainstream (see here, here and here). I constantly exhort people to question their unconscious domestication. I encourage people to question society, their parents, their boss, and themselves. And to question, of course, authority.

Since a young age — since, I don’t know, around the age of 6 — I’ve always questioned things. In high school, I was one of those grunge/punk kids that rebelled against “the system” (until I dropped out due to boredom, that is). I eventually went to college and dropped out of that, too. Not because I was lazy, but because I never intended on getting a degree. I chose to go to classes that I was interested in, instead of following core requirements and a major program. I’m not trying to downplay the value of diplomas, or degrees, but the path of self education has always felt the most right for me. (See: becoming a raw foodist, Jeet Kune Do, blogging, drumming, writing, web design, and reading at least one book a week.) I commend those that follow the traditional path of education deliberately (instead of doing it because they’re told it’s a good idea). It just wasn’t for me, personally.

So anyway — back to the story: During my short-lived high school days, I wanted to disengage from the machine. So I became “anti-everything.” I rejected popular notions, traditions, belief-systems, religions, and anything classical, formal, or institutionalized.

Now this was something I was really proud of back in the day. It was everything street cred and a serious symbol of how “real” you were. It was a seal of renegade pride to not wear anything with a label or brand name. If you were a true non-conformist, you didn’t listen to music that was on the radio. You read books and listened to music that were considered “underground,” and often admired artists simply because they were unknown. We called this being real.

If you want to meet a real non-conformist (hell, the title of his blog is The Art of Non-Conformity. Helloooo.) I suggest you check out Chris’s blog. He also has a really badass free ebook called A Brief Guide to World Domination. You won’t be disappointed. Plus you can’t be even if you wanted to. It’s free.

Before I talk about the pitfalls of this approach, I’ll say a bit about the reasoning for questioning authority and all things popular.

See, if you’re really down, if you’re really with it, then you know that the whole reason for non-conformism is to not live unconsciously. It’s to get in touch with who you really are and express your own individuality. This is wonderful. This is beautiful.

While it doesn’t happen all the time, I occasionally get criticized for admonishing other people to follow their own path and rejecting the mainstream. Following your own path, for the sake of being different, isn’t very smart when you’re trying to reinvent the wheel.

That’s because modeling the success of other people is often one of the quickest ways to become successful. I have nothing against this. I don’t think it’s wrong, but it only makes sense if that’s really a deliberate choice.

We’re all a bunch of posers.

If there is anything the nonconformist hates worse than a conformist, it’s another nonconformist who doesn’t conform to the prevailing standard of nonconformity.” —Bill Vaughan

We all live our lives within a giant melting pot of borrowed ideas. Our beliefs and views about ourselves and the world are nothing more than a collage of things we’ve heard from other people, or ideas we’ve picked up and patched over our existing mesh of ideas along the way. We can pick up new ideas, new beliefs at any time and shed the old skin of what we no longer identify with.

So yes, in a way, nothing is original. Nothing is unique. We all have the same DNA, just arranged differently.

We’re all saying the same thing, in different tones. We only perceive it as different because we’re reorganizing the notes on the ledger. A musician may play the notes at different lengths, in different time signatures and varying progressions and keys. But they’re all the same notes.

Studying martial arts and Jeet Kune Do has led me to see that conformity to systems of fighting doesn’t make much sense. Placing your attacks and defenses into set patterns leaves you fixed and immovable when real life happens. Fighting, like real life, is alive. It’s dynamic. Bruce Lee was known for rebelling against all styles because he said “We all have two feet and two legs. How can there be any other style of fighting, unless you have three feet or three legs?”

In the same way, we’re all living life with the same stuff. We all work, sleep, and eat the same way. Though we might have different expressions of these things, we all put on our pants the same way.

So yes, blindly rejecting the mainstream is pretty stupid. Non-conformity for the sake of non-conforming is still conformity.

Rejecting all patterns and styles blindly is still a pattern.

Do I think that rejecting everything because it’s popular is conformity masked as some rebel badge of “with-it-ness” or a sign of how “real” you are? Yes, I do. I think it’s just as unconscious as blindly following trends. But I also think that questioning is a deeply sacred part of life. Yes, it can become lame when questioning everything becomes an institution in and of itself. But I think it’s a better alternative to some other traditions (see: not questioning a book written over 2,000 years ago).

So yes, I’m a conformist. And I encourage you to be one, too. After all, non-conformity can be quite ugly taken to the extreme. You wouldn’t want to chop off all your limbs or stop wearing pants for the sake of being different, right? I didn’t think so.

What this all comes down to is…

If you want to wear chucks and cardigans as a badge of your indie-ness, go right ahead. If you like rules, routines, and detailed plans, do that. Follow trends or boycott them. Avoid all cliques or be a scenester. Embrace the system or rage against it, but do so consciously and deliberately. And remember, life is dynamic and you’re alive, and therefore subject to change. If you rejected something because you thought it was trendy and you found out later that you really did like it, be honest with yourself and accept that.

Free spirit or group-think, express yourself authentically. Accept that who you are now and what you believe now may not be the same in 5 years or 5 minutes.

Embrace your aliveness. Embrace that you might not recognize who you were yesterday and that’s okay. As you grow and change, so will your dreams and desires. The good news is that your integrity never changes. It’s always nudging you to accept what you really feel. It doesn’t differentiate between what’s popular and what’s not. It just knows what is. Call it intuition, your conscience, whatever you like; it’s probably a good idea to listen to it. When I do, things just seem to work a whole lot better than when I resist and try to “rebel” against things because of their homogeneity.

You might also be wondering: if I really don’t think that mainstream ideas are evil, why do I continually write posts in a way that comes at things from an unconventional angle? Why do I write articles with titles like “Productivity is a Waste of Time” and “If It’s a Good Idea… Don’t Do It”? Is it because I think that unconventional ideas are better? No, I don’t.

I just happen to get bored reading the same things all the time. I like to explore uncommon, lesser seen angles to view things from. Everything conventional is already being said, anyway; why would I want to repeat the same echo?

The whole unconventional, counter-intuitive thing is my style. It’s the way I like to do things, but it’s just my flavor. It’s nothing different, really.

It’s just my way of rearranging the notes.