My boss laughed when I told her.

“Just watch me,” I thought.

A year later I would prove her wrong. But it wasn’t long before this that I had completely given up.

Maybe it was because I had just let myself down so much that I couldn’t trust myself anymore.

So many of my ambitions were like this. Mostly relegated to the cloudy realm of thought.

Now it was different. Now it was time to get my hands dirty.

You see, I always believed that I could defy the odds. When I would hear others making excuses about famous, successful people, labeling them as special or gifted, I secretly thought “I could do that too.”

I wasn’t going to get anywhere thinking about it anymore though.

Nope. It was time to really see what would happen if I gave it everything I’ve got.

A year later I quit my job and was doing what I loved full time.

Everyone around me thought I couldn’t follow my passion. That was for “special people.”

I proved them wrong. How? I decided to give myself one solid year of giving everything I had to make it work. And in this post I want to show you how so you can defy the odds too.

Maybe the people around you think you’re unreasonable, or crazy too. If you follow this through, a year from now they’ll just be jealous.

“The greatest pleasure in life is doing what people say you cannot do.” —Unknown

I challenge you to ONE year, going ALL OUT

Your passion, your waking up excited deserves at least ONE stinking year of devoted action.

Now, I’m not talking about lukewarm energy, or half-assing it.

No, I’m talking about being freaking obsessed, making your only mission in life for one year to get paid to be you.

I’m talking about dropping everything and getting hungrier than you’ve ever been.

I’m talking about selling your TV, banning Facebook from your life and detoxing hardcore from any distractions that dare to steal your progress away from you.

If you do this and make sacrifices you’ve never made before, and you make working on your own terms a reality, it will be worth it.

This will be a permanent change that deeply affects the rest of your life forever.

The one question for you to defy the odds:

What are you willing to do to make quitting dead-end work forever a reality?

The person with the most compelling answer, I’m going to give a free membership to the 365 Days to Freedom program, which opens tomorrow at 10am Pacific.

P.S. Jennifer was willing to give one year.

This is what happened for her.

Follow a proven framework to earning a living from your passion

Want to get my bestselling course on making your first $1k from your passion?

It’s “pay what you want” for a limited time right now. 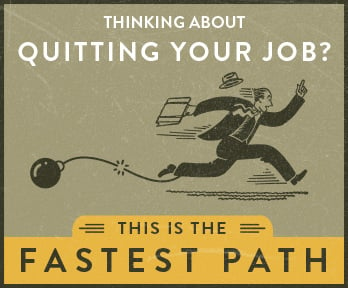